The Ohio State defense had an uneven showing protecting a lead against Purdue’s pass-first quick game in the Buckeyes’ 59-31 win. Ohio State opened the first series in cover 4 Meg (the corners in man on the outside). 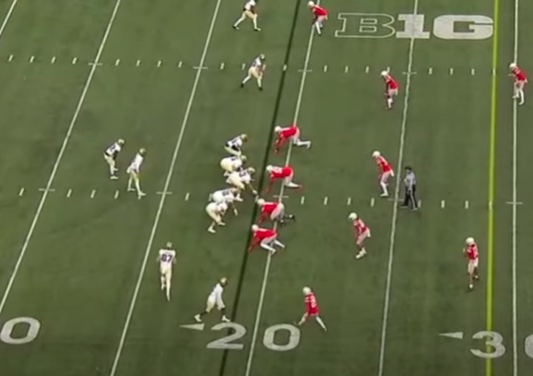 The Buckeyes were able to force an opening three and out, and were generally successful defending the Boilermakers’ wide field screen game throughout.

But Ohio State’s efficacy waned as Matt Barnes adopted more of a pass-first approach. Even on early downs, the Buckeyes often played what are generally their third down concepts such as cover 2, cover 5 (2 deep safeties with man coverage underneath), or an 8 man dropping cover 3 buzz creating a layered zone approach.


OSU used a lot of this on passing downs. 8 man 3 buzz. Creates a layered zone. Note how boundary S Hickman carries 3 vertical as the buzz defender...
Click to expand...

So they abandoned what was working so well in the first quarter simply because they had a huge lead probably, or is that oversimplifying it?

Thanks Ross, these are awesome.

Ross - To me it seemed like the flat defender (Williamson / Ransom) were frequently slow to get out there. I’d think their job would be to sprint out to the flat. Or are open flats just a weakness in the scheme OSU was running?
Show hidden low quality content
You must log in or register to reply here.